She’s 15. She’s bullied at school. She’s bullied online. She wishes she could disappear. She’s only a sophomore – there are still two more years of high school after this. She worries all the time about what someone will say to her or about her next. She’s in pain. She wonders whether or not she should kill herself.

He’s 36. He did everything he was supposed to while growing up. He graduated from high school. He graduated from college. He got a job. He got married. He got promoted. He had a family. He got fired. He’s worried all the time about money and his family’s future. He started drinking a little too much – then a little too much more. He’s in pain. He wonders whether or not his family would still get his life insurance if he killed himself.

These scenarios are real. These feelings are real. These people exist, and you know them. Perhaps not these two specifically, but people just like them that are feeling down because things aren’t going the way they planned and they’re exhausted from fighting back. Or perhaps someone you know is struggling to manage mental illness like depression or bipolar disorder, or a serious eating disorder. They’re fighting too and could be equally exhausted. You might recognize some of the signs someone you know is feeling. Perhaps the signals they are showing seem like they want to kill themselves. What should you do? 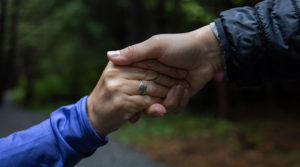 Ask them! The myth that talking about suicide or asking someone if they feel suicidal will push them toward committing the act is simply not true. Talking about it provides the opportunity for some open communication which in turn may help lessen the fear the person is feeling. To encourage someone to live, you must be willing to ask whether or not they intend to end their life.

If you’re a parent, the Society for the Prevention of Teen Suicide, Inc. says it is important to talk to your child about suicide and has some excellent resources for how to do that. It is the third leading cause of death in adolescents and the second for college students, so even if some parents would like to believe otherwise, this subject is relevant and an important topic to discuss.

Just asking can make a difference

The most important thing to remember is that while someone else’s suicide is never something for which you are responsible, it is your business; it’s everyone’s business. Just asking someone about their feelings or if they’re thinking of hurting or killing themselves can make all the difference in the world. If you notice someone is demonstrating the warning signs that they may kill themselves, that is the time to take the phrase, “If you see something, say something” very seriously. If you are not comfortable saying something directly to the person you fear is in trouble, tell someone close to them, like a spouse, significant other, parent, or teacher.

If you have feedback about this content or have additional topics ideas for SEARHC, email us at mchase@searhc.org.

SEARHC Behavioral Health Services
For non-emergency situations, but feel like talking would help, the following link will take you to SEARHC’s Behavioral Health resources.
https://searhc.org/service/behavioral-health/

If someone you know is in immediate danger of harming themselves, please call 911 immediately!