Sitka paves the way in Alaska with Tobacco 21

After over two years of debate, the Sitka Assembly passed a Tobacco 21 ordinance on May 22, 2018, making Sitka the first community in Alaska to raise the minimum legal sales of tobacco products to 21. The new law goes into effect on August 22, 2018, right before the school year starts.

This new law makes it illegal for Sitka retailers to sell tobacco products to anyone under 21 years of age, raising the legal sales age to match that of alcohol and marijuana. E-cigarettes and vape devices, which are heavily on the rise, greatly increasing a youth’s risk of smoking cigarettes, are also illegal to sell to youth under 21,  per the Tobacco 21 ordinance.

There was also another, much smaller local partnership in play that was keen on Tobacco 21 becoming law in Sitka. Two very tenacious staffers working for Health Promotion programs in the community; one of them at SouthEast Alaska Regional Health Consortium (SEARHC) and the other at Sitka Community Hospital (SCH). SEARHC and SCH are both members of the HOPE Coalition and Sitka Health Summit, but these two individuals added some extra effort.

Friends and former tobacco users, Amanda Roberts, Tobacco Health Educator at SEARHC, and Doug Osborne, Director of Health Promotion at SCH, took the challenge to implement Tobacco 21 personally as each began using tobacco before the age of 20.

With the facts in their favor, the two health advocates set out to ensure the community and the Sitka Assembly knew the facts as well.

For example, sales of cigarettes to people younger than 21 are relatively small; only 2.12% of total sales. But, 90% of smokers start by the age of 21, so eliminating the option to purchase cigarettes also eliminates 9 out of 10 future smokers and, hopefully, prevents a lifetime of nicotine addiction. 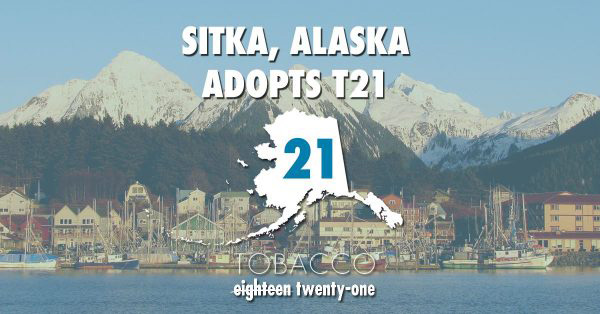 As counterintuitive as it seems, having fewer smokers is also better for business. People often assume that reducing the number of smokers also reduces revenue in local stores, but studies show that overall, places with fewer smokers have higher socioeconomic status, better health, better jobs, and a better quality of life for everyone living there. When people aren’t spending money on cigarettes (at nearly $14 per pack) and recurring medical bills, they can spend it on other things in the community.

Roberts and Osborne have personal experience on their side, too. Both know the struggle of breaking the addiction to tobacco and having that history legitimized their position. They are “walking the talk,” as each understands what it means never to start using tobacco on the most individual level.

“Tobacco 21 is changing history in Sitka and the State of Alaska. It is a law that is trending across the nation and already has shown benefits in the reduction of youth initiation to tobacco use, as well as overall tobacco consumption. It is a huge step in the right direction, toward a healthier future and building the foundation for a tobacco-free next generation. It’s exciting! I feel privileged to be a part of this movement,” says Roberts.

The plan hatched by two friends from separate health organizations a success, bringing this Southeast community one step closer to a tobacco-free next generation.