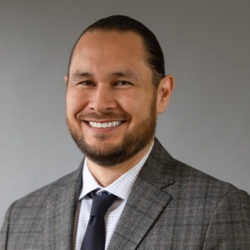 Prior to his tenure at SEARHC, Michael spent more than five years as an associate attorney with the Indian law firm of Sonosky, Chambers, Sachse, Miller & Munson, LLP, in Anchorage. He also clerked for Alaska Superior Court Judge Trevor N. Stephens in Ketchikan. During law school, Michael participated in the University of Washington Law School Tribal Court Criminal Defense Clinic, serving as a public defender on the Tulalip Indian Reservation in Tulalip, Wash.

Michael earned his Juris Doctor (JD) degree from the University of Washington Law School in Seattle, and his Bachelor of Arts degree from Fairhaven College’s Law and Diversity program at Western Washington University in Bellingham, Washington. Michael is admitted to practice in Washington and Alaska, and before the U.S. District Court for the District of Alaska and the U.S. Court of Appeals for the Ninth Circuit.