Naloxone Works for Opioid Overdose and Anyone Can Give It

If you or a friend or family member are at risk of an opioid-associated, life-threatening emergency, talk to your doctor or pharmacist about obtaining naloxone.

The opioid crisis touches too many Americans. According to the American Psychiatric Association, nearly one in three people know someone who is addicted to opioids. In 2013, more than 16,000 people died of prescription opioid toxicity and over 8,000 from a heroin overdose. Even the southeast Alaska maritime industry is not immune from the effects of the opioid crisis.

It’s no secret that the U.S. opioid epidemic has strongly impacted the commercial fishing industry. Vessel operators can no longer assume that they will never be faced with responding to the life-or-death situation of an overdose onboard.

Fortunately, naloxone is an effective treatment for opioid overdose that can be administered in the field by non-medical personnel. To help you decide if naloxone belongs in your vessel’s first aid kit, Dr. Ann Jarris of Discovery Health, MD, PLLC has written a short explainer on naloxone and how it is administered.

Most people in this industry receive training in First Aid, CPR, and Automated External 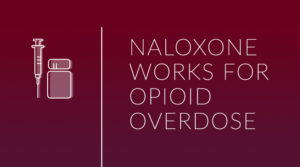 Opioids are a class of drugs such as morphine, hydrocodone, oxycodone or heroin. They primarily affect the brain and respiratory system. An overdose can lead to unconsciousness and respiratory arrest, where the victim has slow or absent breathing. This can then lead to cardiac arrest and it can be difficult for responders to distinguish between a primary cardiac or respiratory arrest.

Naloxone is a medication that blocks the actions of opioids. It will rapidly reverse the effects on the brain and respiratory system. A victim with an opioid-associated, life-threatening emergency may wake up and start breathing again when given naloxone. It should be noted that this effect is temporary and may wear off, with the victim becoming unconscious again. A victim who has received naloxone should also receive professional emergency medical treatment.

Naloxone can be given as a shot in a muscle, in a vein, or as a spray in the nose

Lay rescuers may encounter autoinjectors, similar to an Epi-Pen, that will inject the medication into a muscle and retract the needle. More commonly, intranasal naloxone may be used, where the rescuer squirts a nasal spray into the victim’s nose.

In 2014, the FDA approved the use of the naloxone autoinjector by lay rescuers. Since then, community-based, opioid overdose response education and naloxone distribution programs have become more common. States have varying laws as to who can purchase and administer naloxone, but Good Samaritan laws protecting lay responders who administer naloxone in good faith are becoming more common.

The 2015 AHA guidelines for cardiac arrest with opioid overdose recommend that lay rescuers continue to follow existing guidance for cardiac arrest by alerting 911, calling for and applying an Automated External Defibrillator (AED), and performing high quality CPR. Naloxone administration can be considered as soon as possible after these initial interventions.

If you or a friend or family member are at risk of an opioid-associated life-threatening emergency, talk to your doctor or pharmacist about obtaining naloxone under a state standing order, and seek out training from the American Red Cross or another qualified training organization.