In 2018, State lawmakers passed SB 63, Alaska’s smoke-free workplace bill, prohibiting “smoking in enclosed public places and workplaces, including buses and taxis, stores, bars and restaurants,” according to the Alaska Department of Health and Social Services.

The law seemed sensible enough, as secondhand smoke can cause health problems like lung cancer. But some Sitka business owners worried that in the absence of ashtrays indoors, cigarette butts would litter the outdoors (one bar owner even mounted an unsuccessful challenge to the law).

In October 2018, as the new law was going into effect, a range of partners, including SEARHC, Sitka Counseling and Prevention and Healthy Organizations, People, and Environments (HOPE) began monthly cigarette butt cleanups in Sitka. The coalition, which celebrated its one-year anniversary on Oct. 25, picked up 2,000 butts off the streets of Sitka during a recent cleanup.

The members of the cleanup coalition agree that despite the enormous number of butts they dispose of, the cleanups are fun and bring awareness to the community.

Awareness about the harmful effects of tobacco, in general, has been increasing in Southeast Alaska. The August cleanup coincided with the one-year anniversary of Sitka passing the first Tobacco 21 law in Alaska, which prohibits the sale of tobacco to individuals under the age of 21.

SEARHC Tobacco Health Educator Amanda Roberts, an advocate for preventing teens from getting started with tobacco, supports the new law because Alaskan youths use tobacco at a higher rate than the national level. Stu 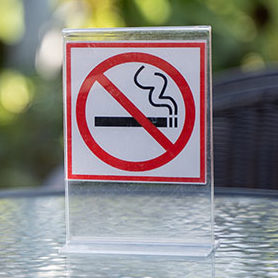 dies show how easy it is for young brains, which develop until approximately age 25 or 26, to be affected by cigarette use.

Keeping youth from using at an early age is part of broader work being done by SEARHC and other key partners like the HOPE Coalition because best practices across the country indicate no one tobacco policy effort can be successful alone, and cessation support must be offered continuously.

In Sitka, retailers have begun to adjust to the new normal with cigarettes. Some even see a silver lining. Greg Dahl, manager for the supermarket AC Lakeside, sees tobacco sales declining, but if customers live longer he figures, in the long run, they will buy more groceries.

The dedicated cigarette butt cleanup efforts in Sitka have led to cleaner streets and stronger partnerships between the community stakeholder groups that regularly take part. Residents have been appreciative of the efforts, too.

“Thank you for keeping the community clean,” one community member said. “Keep up the good work.”

To get involved in the monthly cigarette butt cleanups in Sitka: Contact SEARHC Tobacco Health Educator Amanda Roberts by calling 907.966.8745 or by emailing her at amandar@searhc.org.